A central aspect of the ethical teaching in the book of James is proper treatment of the poor. James 1:27 commands the care of widows and orphans, in 5:15 he commands the elders to care for the sick in their churches. James warns his readers that the wealthy ought not treat the poor with contempt or insist on special privileges (2:1-9). In fact, James 5:1-6 is a stunning condemnation of the wealthy who store up treasure on earth and abuse those who work for them. 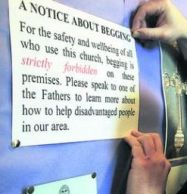 James’ concern for the poor accords well with the situation in Judea just prior to the Jewish revolt, John Painter points put that in the years leading up to the revolt there were increasing tensions between the wealthy Aristocratic Priests and the poor priests and Levites who served in the Temple (Just James, 250). Since the aristocratic priests were likely Sadducean, few (if any) from this level of society joined the Jesus movement. The poor Pharisees, however, may have been attracted to Jesus as a messiah, teacher of the law, and had no problem with the idea of resurrection.

This may mean that the church in Jerusalem was living in a kind of self-imposed poverty, perhaps because they were modeling their lives after Jesus. Just as Jesus had no home or possessions to speak of, the members of the Jerusalem church shared their possessions and lived in anticipation of the return of their Lord. If this is the case, they may have been despised by the aristocracy, who understood wealth as a sign of God’s blessing. This somewhat perverse misunderstanding of the Blessings of the Law would have led to the assumption that the ones living in poverty were under God’s curse.

The letter of James therefore gives us a bit of insight into the social conditions of the Jerusalem church in the middle of the first century. Just as care for the widow and poor is typical of the prophetic message of Hosea or Amos, James takes up the cause of these undefended members of the community.  Karen Jobes points out that James 5:1-6 is a “prophetic denouncement” of the rich, people who accumulate wealth by abusing the poor (Letters to the Church, 170).   She sees James’ attack on the rich as an attack on an “evil arrogance which is incompatible with spiritual maturity.”

To what extent is the danger about which James is concerned a problem in modern churches?  Is there favoritism in the church? Is there an “evil arrogance” which is evidence of our spiritual immaturity?  I think that perhaps there is….

11 thoughts on “Proper Treatment of the Poor in James”