As John Dowden pointed out in a comment on a post I made on Mark’s Triumphal Entry, only the gospel of John mentions the palm branches. In John 12:13, the Greek, φοινιξ (palm) is used along with the Coptic loan-word βαΐον (branch). The only other place in the New Testament where this word for “palm” appears is in Revelation 7:9, the martyrs under the throne of God have branches in their hands as they worship the Lamb. 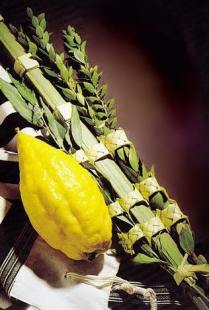 Waving branches is associated with Sukkot (Feast of Booths). At Sukkot, people marched around with a lulav, a bundle of palm branches with an etrog (a citrus fruit) tied to the end, usually with a great deal of singing and dancing. (See b.Sukkah 5.4 for a description of the festival.) The Hallel was to be sung each day, during which the people would shake their lulav.

Certainly there are similarities to the Triumhal Entry, but Jesus enters Jerusalem at the Passover, so the palms cannot be part of the celebration of the Sukkot nor is there any allusion to the fruit used at that feast. Although I am not sure, it is possible the etrog was not ripe at the time of Passover, the early Spring; someone who knows can correct me on this!

The palms are not associate with worship at Passover, but with the liberation and cleansing of Jerusalem more than 100 years prior to Jesus. The image of a king entering Jerusalem in victory appears in 1 Maccabees 13:51.

1 Maccabees 13:51–52 (NRSV) On the twenty-third day of the second month, in the one hundred seventy-first year, the Jews entered it with praise and palm branches, and with harps and cymbals and stringed instruments, and with hymns and songs, because a great enemy had been crushed and removed from Israel. Simon decreed that every year they should celebrate this day with rejoicing. He strengthened the fortifications of the temple hill alongside the citadel, and he and his men lived there.

Near the end of the first Jewish revolt (141 B.C.), Simon liberated Judea and set up an independent state. In 13:41-42 people begin to sign documents “the first year of Simon the great high priest and commander and leader of the Jews.” He captures Gaza and removes “all uncleanliness” from the city, then in 13:51 he enters the citadel in Jerusalem and “cleansed the citadel from its pollutions.” He establishes peace and provides food for the people starving from famine.

If anything, the way Jesus enters Jerusalem heightens the messianic hopes of the huge crowds gathered for Passover. Caught up in the messianic fervor, the audience waves palms to welcome Jesus as their ancestors welcomed Simon a century earlier.

Was this Jesus’s intention all along? Was his goal to stir up this kind of frenzy, only to teach in the Temple for a few days that the Messiah is not there to liberate the Temple from the unrighteous Jews or Jerusalem from the pagan Romans?