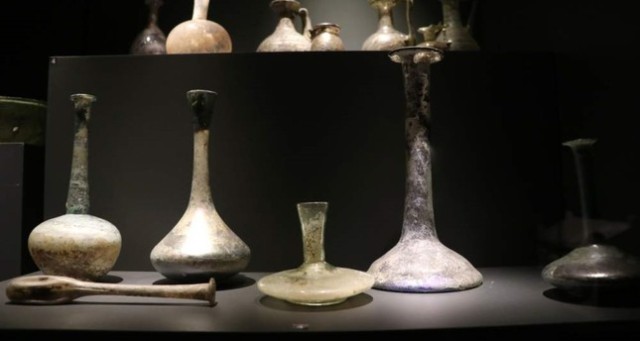 Verse 8 is particularly difficult to translate (observe the differences between the KJV, NIV and ESV on this verse). There is some rare vocabulary and wordplay and two or three unclear sections which make the translation of Psalm a challenge.

The first line of the verse begins with nodi, my “tossing” or “wandering” (NIV, KJV), even “homelessness.” This appears to come from a root word which is used for a reed tossing in the wind, or aimless, homeless wandering.  The verb is used twice in Job (2:11 and 42:11) as people comfort Job in his despair.  Since the next line of poetry refers to tears, it seems best to read this word as an emotional tossing, perhaps David laying awake at night, in fear of his enemy. God has kept a record of David’s anxiety (sepher).

The second line, “you have put my tears in a wine-skin,” the noun no’d.  The word sounds nearly the same as “tossing,” but refers to a leather skin used for holding wine (Josh 9:4, 14, the Gibeonites), or milk (Jdg 4:19, Jael).  While the first and the third line have words related to writing, it is better to see this as God collecting David’s tears as he tosses in the night, worried about what tomorrow might bring. The NIV tries to preserve the metaphor or writing in all three lines by reading the word for a leather wine-skin as a writing surface.Unfortunately there is no evidence of the practice of collecting tears in the ancient Near East. When tested, Roman bottles often assumed to be Lachrymatory bottles give evidence for holding perfumes or oils, not tears.

The third line uses sephred, a noun similar to the first line: “have you not kept records?” or “are they not in your book?” The noun can refer to a book or scroll, and in Mal 3:16 it is used for a remembrance book, a scroll on which someone might jot notes so they do not forget things. The metaphor is of God recording all of David’s suffering so that can be used as evidence when God vindicates him and judges his oppressors.

What is the point of this metaphor? David’s emotional response extreme fear and danger has not been ignored by God, in fact, the sleepless nights and tears have been carefully recording in God’s records and not a single tear has gone uncollected.  God treats David’s tears like precious water or valuable wine or milk.  In a desert environment, water in a skin is one of a most valuable possession. God is pictured as collecting and preserving David’s tears.

This is a picture of God’s care for the suffering of his people.  He makes a record of every tear and every sleepless night and remembers them all.  When the time comes, David is confident that the Lord will turn back his enemies and oppressors, recalling his long nights of worry and anxiety.