Any “quest for the Historical Peter” faces serious challenges. James Dunn titled his chapter on Peter in his book on the apostolic period “The Voiceless Peter” (Beginning at Jerusalem, chapter, 35). His point is that the book of Acts has little to say about Peter after chapter 12 and there is no historically reliable data which allows us to know much at all about Peter’s ministry after Acts 15. Part of the problem for Dunn is that he does not accept 1 Peter as coming from a historical Peter, although he discusses the locations from 1 Peter 1:1 as possible locations for Peter to have ministered and he uses the reference to Babylon in 5:13 as a in that Peter was in fact in Rome in the early 60’s. 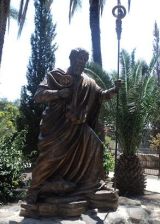 As is usual, the earliest information we have on Peter’s ministry comes from Paul. According to Gal 2, Peter spent some time in Antioch. Based on Paul’s comments in Corinthians, it is usually though that Peter worked in Corinth at some time after Paul founded the church. Peter is mentioned in 1 Corinthians four times, once in the traditional evidence of the resurrection, and twice in the context of factionalism in Corinth (1:12 and 3:22). Lastly, he is mentioned in 1 Cor 9:5 as traveling as an apostle with his wife.

That there was a faction in Corinth that saw Peter as a leader does not mean that Peter ministered in the city. Jews from all over the empire passed through Corinth, as seen by Aquila and Priscilla. If there were factions in Jerusalem (James, Peter, maybe later John), then those factions could be present in Corinth as well.

That there is a group that claims only to follow Christ implies is important since it is obvious that Jesus did not visit Corinth. This faction looked to Jesus as a sole source of authority perhaps because they were followers of Jesus during his ministry and have since relocated to Corinth. The same might be true for those of the Peter faction. They knew Peter from Judea and considered him to be the chosen successor to Jesus, the leader of the Twelve.

More positively, 1 Cor 9:5 does in fact state that Peter traveled, implying that Peter engaged in some sort of mission activity.. The implication is that he traveled with his wife and when he was in a location his needs were covered by the church in which he ministered. This sounds as if Peter traveled to established churches and provided some sort of teaching services, perhaps as a witness of Jesus’ ministry and teaching it was important for him to pass along this tradition to the next generation. This means that it is at least possible that Peter traveled as far as Corinth and taught in one or more of the house churches in that location, but it is not required by Paul’s statements in 1 Cor 1:12.

Peter’s traveling ministry may have been to observe or inspect churches in order to see of they were keeping the traditions as they were handed down to them. Acts 8 is evidence that Peter and John did this, following up on Philip’s ministry in Samaria and dealing with a potential problem, Simon Magus. This also may explain his interest in the Antioch churches as well. The impression we get from the book of Acts is not that Peter is a church planter, but rather a traveling teacher who builds up already-established congregations by ensuring that these churches are teaching the apostolic Faith.