Frame says his goal in the book is to show forth the glory of God in the world God has made (13). The biblical foundation for the argument of this book is Psalm 8:3-6 and Romans 1-3, but Frame also refers to Paul’s preaching in Acts 14:15-18 and 17:22-31 as additional examples of natural theology. For Frame, natural theology is finding out about God in the world he has made (17), although in the book itself he does not provide a philosophical argument God exists from nature in the tradition of the teleological argument 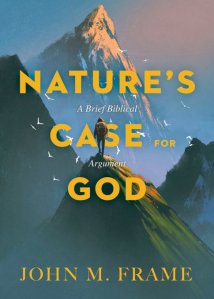 This book is divided into two sections. First, Frame argues for the existence of God from the “witness of the created world.” Based on Romans 1:18-20, he argues we can know some of God’s character from creation, his greatness, oneness, wisdom, goodness, and presence. This is not a traditional quest for the attributes of God in nature, Frame focuses only on the presence of one good, wise God as revealed in creation. He does not actually point out elements of creation which might point to the existence of God, rather he argues this view of God is rational.

Second, Frame considers evidence drawn from “the witness of human nature.” Here Frame is interested in “four states of conscience.” First, the seared conscience is essentially the sin nature. Second, the accusing conscience refers to the human tendency to know something is right or wrong. Third, the awakened conscience refers to the practice of godliness once someone has become a Christian. Fourth, by the good conscience Frame refers to the evaluation of conduct and the Christian response with actions which please God. When I began to read the second section of the book, I expected something along the lines of C. S. Lewis’s moral argument for God’s existence. This seems to be what Frame has in mind, but two of his four states of conscience refer to post-conversion experience.

Like Frame’s Christianity Considered (Lexham, 2018), this is a very short book and clearly not a full philosophical argument for God’s existence. As a result, more advanced readers will find it frustratingly brief. Frame recognizes this and includes an appendix interacting with David VanDrunen’s A Biblical Case for Natural Law (Grand Rapids, Mich.: Acton Institute, 2008).

Chapters begin with the key Scripture and the book often prints key texts in the body of the chapter. Each chapter concludes with a few discussion questions and a bibliography “for further reading” (often to Frame’s larger works). The book has at least twenty-five pages dividing chapters and sections, so the body of the book is less than 100 pages of text. Some chapters are only a few pages, chapter 9 is barely a page.

However, for the layperson this book may answer some questions about how God has revealed himself in his creation. Frame presents some very difficult philosophical issues in a friendly and accessible manner.

NB: Thanks to Lexham Press for kindly providing me with a review copy of this book. This did not influence my thoughts regarding the work.