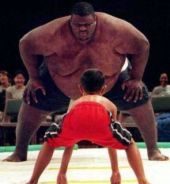 Although it is possible Paul includes this section as a general commentary on how Jews and Gentiles ought to get along in mixed congregations, it is likely he has heard something about a specific conflict in the house churches in Rome. He describes some of the believers as weak and others as strong and admonishes the strong to not pass judgment on the weak.

Who are the “strong and weak” in this passage?

Most commonly, the “weak” are legalists and the “strong” are those that are not trying to “earn” status by their good works. This view has been eroded by the New Perspective on Paul, since it may not be the case that Jews in the first century say themselves as earning their salvation.

After surveying several options, Cranfield concludes the weak are those who desire to continue to observe the ceremonial law of the Old Testament. If this is the case, it is a similar situation to the Gentiles in Galatia who are being encouraged to fully convert to Judaism in order to follow Jesus.

It is possible this weak/strong discussion is an extension of the “meat sacrificed to idols” problem in 1 Corinthians, as suggested by Mark Reasoner. If so, then the weak might be the Jew, and the strong the Gentile. This suggestion has some merit since Paul wrote Romans from Corinth after the period of conflict had come to a close (after 2 Corinthians). It is possible his experience with the Corinthian believers colors his comments to the Romans who may be struggling with similar issues.

Paul Jewett draws attention to a brief exchanged in Horace in which one character does not wish to speak on the Sabbath because he is “a small man of weakness, one of many” (Jewett, Romans, 834; Horace Sat. 1.9.67–72). Reasoner used this line to argue “the person excessively observant in a foreign religion who matched the ‘weak’ caricature was known to Horace’s audience.” (Reasoner, 54).

What has always impressed me about this passage is that Paul never really says the weak are Jewish and the Gentiles are the strong. That may be what Paul is saying, but our post-Reformation reading of the text tends to obscure Paul’s subtle rhetoric. It is possible a Jewish Christian might hear “we who are strong ought to bear the failings of the weak” (Rom 15:1) as meaning, “we Jews who are strong and keep the law properly ought not to look down on the weak Gentiles who have not fully understood the Gospel yet.” But it is also possible a Gentile would hear Paul saying “We strong Gentiles who fully understand the grace of God should not look down on these weak Jews who insist on Old Covenant practices.”

Regardless of the practices of the weak, their faith is sufficient for Paul to consider them to be Christians. He does not tell the Roman congregations to expel them from the church like the young man in 1 Corinthians 5, nor does he admonish them like he the wealthy in 1 Corinthians 11:17-22. Both the weak and the strong are Christians and equally a part of the Christian community. Both are equally welcome at a communal meal where the Lord’s Table is being celebrated.

This issue has important ramifications for Christian fellowship in the present church. Churches often draw lines where they should not, or fail to draw lines when they should. Are there people who are often excluded from fellowship because of some practice (or non-practice)?