At this time of year we sing the carol O Little Town of Bethlehem. Everyone knows that Jesus was born in Bethlehem and “laid in a manger because there was no room in the inn.” Almost every word of that phrase has been exploded into a plot point for Christmas pageants. We imagine Joseph and his pregnant wife Mary arriving in Bethlehem just as she is about to give birth, only to be told that every hotel room in the city is full. A kindly innkeeper (dressed in your uncle’s bathrobe and sandals) allows the couple to give birth in his barn. 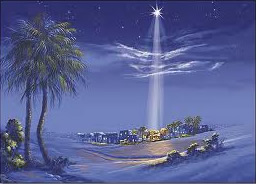 But Bethlehem was no sprawling metropolis. It is doubtful there was an inn, and if there was it was the only inn in the tiny village. The image of Mary going into labor in the lobby of the local Comfort Inn is pure fantasy. The village was still quite small and unimportant in 6 B.C. But there are other reasons why it was important for Jesus to be born in the “little town of Bethlehem.”

First, the Messiah was to be the son of David, the first King of Israel. David was from the village of Bethlehem, a son of Jesse. Jesse was a wealthy land owner in Bethlehem, a “sheep rancher” rather than a Bedouin with a few herd animals. He is described as a town elder, and therefore a more politically powerful man than a “lowly shepherd.”

Bethlehem is only 5 and a half miles from Jerusalem, and 3 miles from Gibeah. While the town was likely small, it was well within the range of Saul’s capital; elders from Bethlehem would have been well aware of court politics.  That Bethlehem is so close to Jerusalem may explain David’s interest in taking the city after he becomes king. When he is anointed the city is controlled by the Jebusites, prompting some scholars to wonder if David was a Jebusite himself!

The image of David when he begins his career is of a boy-shepherd who was at the same time a warrior capable of defeating great enemies because the Lord is with him, and he is committed to the Lord.

Second, the Messiah was to be in the line of David (2 Sam 7:12; Psalm 2, 110). The Davidic covenant describes the son of David, Solomon, in terms which cannot be fully applied to Solomon. He will reign forever!

Psalm 2 is a text which was originally used at the enthronement of a king, but the Psalm cannot describe any single human; that the nations will be ruled by a son of David who sits on the throne with the Lord himself goes well beyond an enthronement text. Likewise, Psalm 110 describes the victory of the son of David in battle in cosmic terms which go well beyond the hopes of any given king of Israel.

The messiah is therefore thought to be the ultimate fulfillment of the “son of David” prophecies. God would send someone to solve the problems of Israel who ultimately fulfilled the role of David in that he liberate the nation from their oppressors and prepared the way for true worship in the Temple. What was not expected is that this person would be quite literally God’s son!

The birth in Bethlehem therefore meets the expectation that the messiah would be from the line of David as well as from the town of Bethlehem.

12 thoughts on “Why Was Jesus Born in Bethlehem?”