In Hebrews 11 the writer explained what he meant by faith, and then gave numerous examples of faith.  Based on these examples, Hebrews 12:1 exhorts the reader to “run the race marked out for us.”  This is possible because we are surrounded by a “great cloud of witnesses.” They are spectators at a sports event, watching present believers “run the race.” But more than that, they are also people who have already run the race and know what must be done in order to win the race. 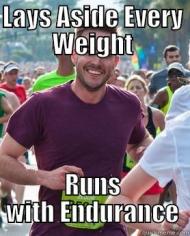 Since we have this great crowd of witnesses, the writer urges his readers to run the race with perseverance. There are two ways in which the runner might not finish the race – by being hindered or entangled.  “Everything that hinders…” refers to weight or bulk. A runner in training would want to lose every extra pound that might hinder then from winning the race. Greek athletes competed naked, just as modern runners will wear very little clothing and shoes designed to be as lightweight as possible.

But the Christian is not simply training to compete, but is running the race already. If this is the case, there is an urgency to the writer’s encouragement to dispense with the things we do not need to run the race properly.

He calls the things which slow us down “the sin that so easily entangles.” Easily entangles is a single word and is only used here in the New Testament. The word has the sense of something which is tight or constricting. If the weight of life hindered us, sin can so entangle us that running the race is no longer possible. Think of a runner that instead of a 100 pound bag of potatoes has his shoes laces tied together.  They cannot walk, let alone run the race!

In order to run the race, the writer also tells his readers to “throw off” hindrances and sin. The word here is used most often for taking off one’s clothes, an apt metaphor here since runners will try to wear as little clothing as possible. The writer is saying if you are going to run the race, run it in the proper equipment.  Imagine that marathon runner dressed in the clothes used for Arctic exploration, a huge parka, heavy gloves, snow shoes, goggles, etc. He will not compete well because he is entangled with things that he does not need, he needs to throw all that stuff off and compete in running shorts. Anything that slows you down should be tossed.

The writer says that the race is “marked out for us.” This is not a sprint, this is a race that has a course marked out, a long race like a marathon. Sprinters, though very athletic, do not usually run in marathons.  There are too many differences between sprinting and marathons that people don’t usually excel at both. (Before I get hate mail from people who run in decathlons, I get it, work with my metaphor. Yes you are special.)

Finally, the writer tells us to run with perseverance. This fits the metaphor of a marathon better than a sprint.  A sprint is a short distance, and the runner gives it all he has, in 5 seconds it’s over. Not much perseverance. The marathon runner runs much slower, he is much more methodical about how he runs, pacing himself so he can finish the race.  As the race progresses, it takes determination to keep going.  Even the best runners have to be mentally fit to run the race all the way, they have to be running with the goal of finishing, and finishing requires perseverance.

If the Christian life is like competing in a marathon, what are other ways Hebrews 12 (or the whole book of Hebrews) exhorts the reader to “compete”?