First Timothy 3 and 1 Titus 1 are well-known passages because the describe the qualifications for church leadership. We usually fret the most over the line about “one wife” and perhaps that the leader must have well-behaved children, but there is far more here than those two more controversial points. 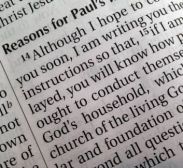 Like the previous section, Paul’s main concern is that the church be organized and led in a way which gives it a good reputation with outsiders. This is also true in business: good reputations are hard to build, they take time. On the other hand, it does not take much at all to destroy a good reputation and develop a bad one.

If you have ever read a restaurant review online, you know that one bad experience can lead to a terrible review and potential lost business. One cranky customer who has bad food or poor service can leave a review (anonymously) online, and scare dozens of people away. The same is true for church.  A family could visit on a Sunday when things were not quite right in the nursery, the musicians were out of tune and didn’t really know the songs, and the pastor finished his sermon on the way to church. This family leaves “unimpressed” and never comes back, but they tell their friends that they tried “that church” and it wasn’t very good.

But Paul is not talking about “church shoppers” in this text, since that sort of thing did not exist in the first century. There are people in the congregation who are leaders in a local house church who have a bad reputation with the community. Maybe they have some shady business practices, or they are quick to bring lawsuits, or maybe they are known to attend the banquets at pagan temples and fully participate in debauchery. If the leader has a bad reputation outside the church, then they bring that dishonor with them when the “desire to be an overseer.” To remedy this situation, Paul tells Timothy (and by extension, the churches) to appoint people to the office of Elder and Deacon who are qualified spiritually and morally for the task.

First Timothy 3:1 is another “trustworthy saying.” In this case it is not a theological statement, but that the person who aspires to be a leader in the church “desires a noble task.” Desiring to be a leader of a local house church is not a bad thing at all, it is a noble task, or a “good work” (v. 1).

It is possible that this line betrays a problem in Paul’s churches in Ephesus. It appears that people were not wanting to serve as leaders in the church. There are several possible reasons for this. First, perhaps the false teachers had created a situation where good people were not inclined to challenge them, the did not desire to become involved in leadership because it meant challenging these false teachers. A second possibility is that the role of overseer or elder was not considered to be a job people wanted to do – it was not considered a “noble task.” It is also possible that people who were capable and qualified did not see themselves as up to the task of leading the church, perhaps for a combination of the previous two points.

One serious problem reading this passage is that we hear words like elder and deacon and immediately think of our modern “office” of elder and deacon. This is not necessarily going to help understand Paul’s view of church leadership. If at all possible, it is best for us to bracket out modern church practice for a few minutes and try to read Paul in the context of first century Ephesus.