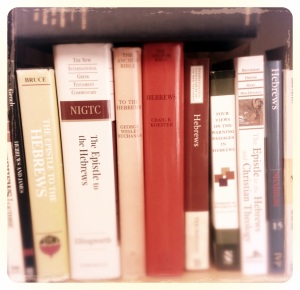 Introduction.  Lane begins his introduction by describing the book of Hebrews as “a delight for the person who enjoys puzzles” (xlvii). I taught through the book of Hebrews in my evening Bible study in the fall of 2009, and I must agree with this assessment. One of the things which struck me about Hebrews commentaries when I was preparing for those sermons is that the sorts of questions and problems one encounters in Hebrews are unlike anything found in the Synoptic Gospels of Paul. In fact, I felt like teaching through Hebrews was like visiting a strange country where I did not quite know the language.

Authorship is main issue in the introduction to commentaries on Hebrews. The normal procedure is to “round up the usual suspects” and give some history of why these have all been rejected before settling on “anonymous” as the best solution. (I have a few posts on the authorship of Hebrews, if you are interested!)

The situation of the original readers is also an important matter which commentary introductions need to treat well. It is generally agreed that the audience is Jewish, living in Rome, and facing persecution. Is the “fiery trial” Nero’s persecution? Have they actually been persecuted, or is the writer anticipating a trial coming in the near future? That the readers are Jewish is assumed, but are they all Christian Jews? Is the letter something of missionary tract from a Jewish Christian to Jews in the Synagogue? Or is it aimed at Christian Jews to keep them from returning to the Synagogue in order to avoid persecution as a Christian?

Paul Ellingworth, The Epistle to the Hebrews (NIGTC; Grand Rapids, Mich.: Eerdmans, 1993). I am impressed by all the commentaries in the New International Greek Text series in terms of exegetical nuance and depth. Ellingworth provides 85 pages of introduction in addition to some 77 pages of bibliography. With respect to authorship, this commentary provides a comprehensive list of suggestions current to 1993, and settles on Apollos as the “least unlikely of the conjectures” (21). The commentary is comfortable with letting the author remain anonymous. He argues that the first readers were “predominately but not exclusively Jewish-Christian” (27), although it is only aimed as a particular group in Rome known to the writer. Like all the commentaries in this series, Ellingworth proceeds through the Greek text in a phrase-by-phrase fashion with all references cited in-text. This makes for a tough read since the language is quite technical. Commentaries on Hebrews necessarily must deal with the Hebrew Bible and Septuagint, Ellingworth demonstrates mastery of both. He regularly places the text of Hebrews in the context of Second Temple Period Judaism.

Craig R. Koester, Hebrews (AB; New York: Doubleday, 2001). This book replaces the earlier Anchor volume written by George Buchanan (1972), nearly tripling the size of the commentary. Like many of the early AB commentaries, Buchanan offered a new translation with only a light commentary. One thing I appreciated about the older commentary is that it had a Conclusion, offering several suggestions for authorship, origin, and purpose only after the book has been read exegetically. Most writers wait to writer their introductions last, but publishers always place the introduction (naturally) at the beginning of the book. Koester’s commentary offers a historical perspective absent from other studies. He begins with 63 pages on the “History of Interpretation and Influence.” He divides this introduction into several sub-sections (early church to 600; 600-1500; 1500-1750; 1750-present). This is an excellent overview of how Hebrews has been treated and will aid the reader in understanding what issues are at stake in reading Hebrews. Koester includes a “selected” theology of the book, since there are some any topics which can be covered theologically in Hebrews. The body of the commentary moves through the pericopes by offering a fresh translation, notes on the translation, and a comment on the theology of the section. Greek is treated in transliteration, sources are cited in-text, but a great deal of comparative literature appears in the footnotes as well.

James W. Thompson, Hebrews (Paideia; Grand Rapids, Mich.: Baker, 2008). This commentary is by far the most brief on the list, but Thompson’s work is very readable and will be useful for both scholar and layman. I think that this commentary might be the “first of the shelf” for the busy pastor. The commentary does an excellent job with the rhetoric of the letter, attempting to read the letter in the light of Greco-Roman homiletical tradition which was popular in the Hellenistic synagogue (13). He treats much of the writer’s use of the Hebrew Bible as midrash, a decidedly Jewish way of treating scripture. Hebrews 7 for example is a midrash on Gen 17:14-20 and Ps 110 (143). Thompson is also at home in the literature of the Second Temple Period, especially Philo. Commentaries on Hebrews must deal with parallels between the writer’s style and that of Philo of Alexandria, this commentary does so without losing sight of the biblical text. The commentary treats the English text with all Greek appearing in translation, sources cited in-text. There are numerous sidebars and occasional photographs in the commentary, something not usually including in scholarly works.

William L. Lane, Hebrews 1-8; Hebrews 9-13 (WBC; Dallas: Word, 1991). Lane’s commentary in Hebrews is one of the better in the Word series. He reads the letter as representing a Hellenistic synagogue, probably a loosely affiliated house church whose members are fairly typical of Diaspora Judaism. The church is located (most likely) in Rome and this letter is intended to encourage them to continue in their new faith in Jesus. Perhaps persecution is the main problem, but a kind of spiritual lethargy threatens the church as much as anything else. The introduction has a nice summary of discourse analysis as proposed by G. H. Guthrie. His summary of the theology of Hebrews is excellent, focusing primarily on the Christology of the book. The body of the commentary proceeds through each major section of the book by first providing a detailed bibliography (including many non-English works), followed by a fresh translation and notes on the text. The Word series always includes a Form/Structure/Setting section after the translation, Lane uses this section to comment on the rhetoric of the letter. The Commentary proper moves phrase-by-phrase, treating the Greek text without transliteration. Following the commentary proper is a short “explanation” drawing the exegesis back to the theology of Hebrews.

B. F. Westcott, The Epistle to the Hebrews (London: MacMillan, First ed. 1889, Second ed. 1892; Third ed. 1903).  This is a classic commentary on Hebrews, available as an e-Book through Google (a 1903 third ed.) recently reprinted by Wipf & Stock (the first ed.) Like many older commentaries, this book runs the Greek text across the top of the page, with detailed (and occasionally cryptic) notes in dual columns. There are numerous “additional notes” scattered through the commentary which give additional lexical or theological content. What is it about a one-hundred year old commentary that makes it worth reading? Commentaries of this age are notoriously brief, cutting to the heart of the matter as quickly as possible. Wescott especially has a sense for reading Hebrews in the light of the rest of scripture, which is all the more impressive since he live well before computers made finding potential parallels quite easy.  The most intimidating thing about this commentary is that all parallel texts are given in Greek!

Conclusion. There are a few books I left off this list to keep it to five. (What! No F. F. Bruce?!)  David Allen’s new commentary from Broadman & Holman is worth a look, but I do not have a copy yet (here is a great review from Brian Small).  This is why  I give only five – this give you (the reader) a chance to let me know what you have found useful in your preaching and teaching.