The Gospel of John describes the well-known event of the Triumphal entry briefly, only mentioning a few features of the story which serve his overall themes.(See this post for the Triumphal Entry in Mark 11.) The Passover feast was a very nationalistic holiday in the first century since it celebrates God’s redemption of his people and the beginnings of Israel as a nation. Waving palm branches were a part of Jewish nationalism since the time of the Maccabean Revolt (1 Macc. 13:51). Images of palm branches will be used in the coinage of both the Jewish revolt in A.D.70 and the Bar Kohkba revolt in A.D. 132.

1 Maccabees 13:51–52 (NRSV) On the twenty-third day of the second month, in the one hundred seventy-first year, the Jews entered it with praise and palm branches, and with harps and cymbals and stringed instruments, and with hymns and songs, because a great enemy had been crushed and removed from Israel. 52 Simon decreed that every year they should celebrate this day with rejoicing. He strengthened the fortifications of the temple hill alongside the citadel, and he and his men lived there 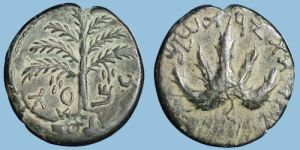 Bar Kohkba coin (A.D.) 132-135 Seven branch palm tree with “Shimon” (Bar Kohkba) on the observe and a grape leaf on the reverse.

The cry of “Hosanna” is from Psalm 118:25-25. The word means “save us, O Lord!”  The psalm was one of the pilgrim Psalms, sung by those who were going up to the Temple during a feast.  Psalm 118:26 was often taken as a reference to the Messiah, when the true the King of the Jews he will save his people.  As people went up to Jerusalem, they would sing this Psalm and look forward to the coming Messiah.

The rest of this Psalm is important. Verses 10-13 describe the writer as in the middle of his enemies, nations which surround him on every side. In verse 17-18 the Psalmist has been disciplined severely but has not been handed over to death. “I shall not die,” he says, “but I shall live.” Verse 19 describes the “gate of righteousness” through which the pilgrims must enter; Jesus has described himself as the gate through which the sheep must pass. In verse 22 the psalm refers to “the stone the builders rejected” becoming the chief cornerstone, a verse Jesus applies to himself in the parable of the Vineyard.

hat Jesus rides a donkey is an allusion to Zechariah 9:9, another text associated with the coming messiah. John does not give the details since they are likely well-known by the time he writes his book. He does emphasize the fact that Jesus deliberately chose to ride a donkey, intentionally evoking the prophecy of Zechariah 9:9. The point of this sign is often missed since it is thought riding a donkey is a sign of humility and peace. It is true that David came to Jerusalem after his son’s revolt “in peace,” riding a donkey instead of a war horse. But a king often rides a donkey; it is shame for a king to ride a donkey in the first century. A better explanation of the donkey is to see that after Solomon was anointed king, he was placed on a donkey and led up to the city of Jerusalem, through the Kidron valley. The anointed son of David, the king named “Peace,” enters the city of Jerusalem to begin the most peaceful and prosperous period in Israel’s history.

Zechariah 9:9 is alluding to that story in the Hebrew Bible, Jesus is the true Son of David who will bring ultimate peace and prosperity, but only after he destroys the enemy of his people. Rather than the Romans, Jesus will enter Jerusalem and offer himself as the ultimate sacrifice for sin.

John once again weaves together allusions to several passages in the Hebrew Bible which hint at who Jesus is. in this case, he is the long-awaited messiah, the one who the Psalmist and the prophets were looking forward to. What else does this passage tell us about who Jesus?